Zesty carrot cake. Making the most of citrus season i decided to make this carrot cake with the bounty of oranges and lemons i had.

I added spices, chopped nuts and candied stem ginger so its full of flavour.

This cake came about because i had to bake a dairy free cake for a workshop i was teaching.

I thought of a vegetable cake, and carrots seemed like a great idea.

If you don’t mind dairy then mascarpone and cream is also a great frosting choice.

I adjusted my favourite spiced parsnip cake recipe and used carrots instead.

This zesty carrot cake went down a treat. I gave my auntie some left overs and she messaged me to say it was the best carrot cake she had ever had so that was lovely.

We photographed the cake together at the workshop and the light was so interesting.

I love how the colours of the light changed from cool to warm every so often. 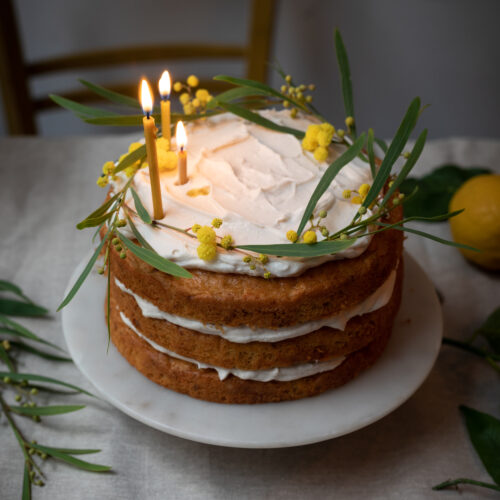 Because the cake had to be dairy free for the workshop participant, i had to think about the frosting.

I was going to do meringue, but i think carrot cake goes so well with cream cheese.

At whole foods i found some vegan cream cheese. The brand was called creamy she original.

I had not tried that brand before but i decided to give it a try and liked it.

I found that two 250g tubs, mixed with half a pot of coconut collaborative vanilla vegan yogurt and some powdered sugar worked really well.

If you are not dairy free then mix 500g mascarpone, with 300ml double cream and add icing sugar to your taste, then whisk together.

I usually add about half a cup of powdered sugar.

I am not a fan of overly sweet frostings, but if you are then add more sugar and taste.

Maple syrup or honey can be used instead or icing sugar.

(I am not affiliated in any way with those brands, i just thought they are great vegan alternatives)

A few other vegetable cake from the archives.

Making the most of citrus season