Candied rhubarb flower cake. Something from my crazy imagination that i dreamed up.

I love to create edible cake decorations, and candied rhubarb isn’t something new. However making petals with it and creating flowers with stamens might be!.

They are so easy to make, and i think they look so pretty.

Cutting the rhubarb at different angles created different sized petals. straight for the smaller flowers and at an angle for the larger one’s.

I peeled really thin strips of the pink rhubarb skin off and made stamens for the centres of the flowers with that.

They are then stuck together with some white chocolate.

The flowers are just the beginning to this cake though.

Its the sponge inside that is requested time and time again in my family.

Raspberry rhubarb and white chocolate is one of my favourite flavour combinations.

The sweet and sour flavours go so well together. The white chocolate seems to caramelise slightly in places.

Usually i make this cake in the summer when raspberries are at their best, but i wanted to make the most of the pink forced rhubarb that is still in season right now.

To make the candied rhubarb flowers you will need

First make a simple syrup by adding the water and sugar in a pan, stir to dissolve sugar then let reduce a little so you have a syrup.

The angle that you cut the rhubarb will determine the shape of the petals.

For the larger petals i sliced it at a horizontal angle and the smaller ones i cut the rhubarb straight.

Cut some of the rhubarb into strips to create the stamens. Or peel some strips of the pink skin off.

Once dried out they are easily broken down into size.

Place rhubarb slices in the syrup and leave for a minute or two.

Remove rhubarb from the syrup and place flat, spaced apart on a lined baking tray.

Bake the rhubarb for 20 minutes, then turn each petal over and bake again, check after 10 minutes, then continue cooking until they are crisp and not tacky.

Some of the smaller strips might be ready after the first 20 minutes, the larger ones can take 20 minutes on one side and 10 to 15 on the other side. Sometimes longer.

Keep an eye on them so they don’t burn.

Let cool on the tray then gently peel off the paper.

To stick the petals together, melt some white chocolate and add small dots of it onto the paper and press in the petals.

Break down the longer strips of rhubarb to make thin stamens and place in the centre.

Once on the cake, the flowers will soften slightly so place on before serving. 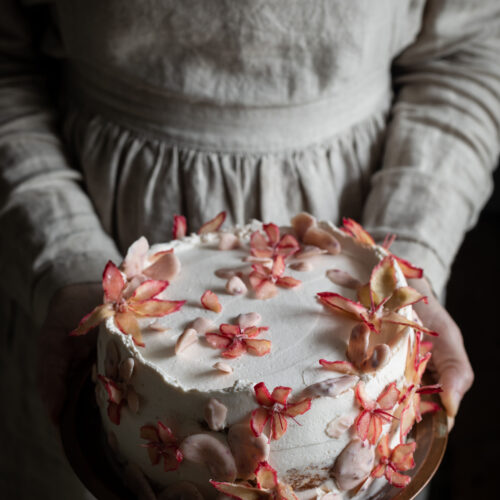 The pink chocolate for the decorations came from the raspberry and white chocolate egg from waitrose.

For other edible cake decorations