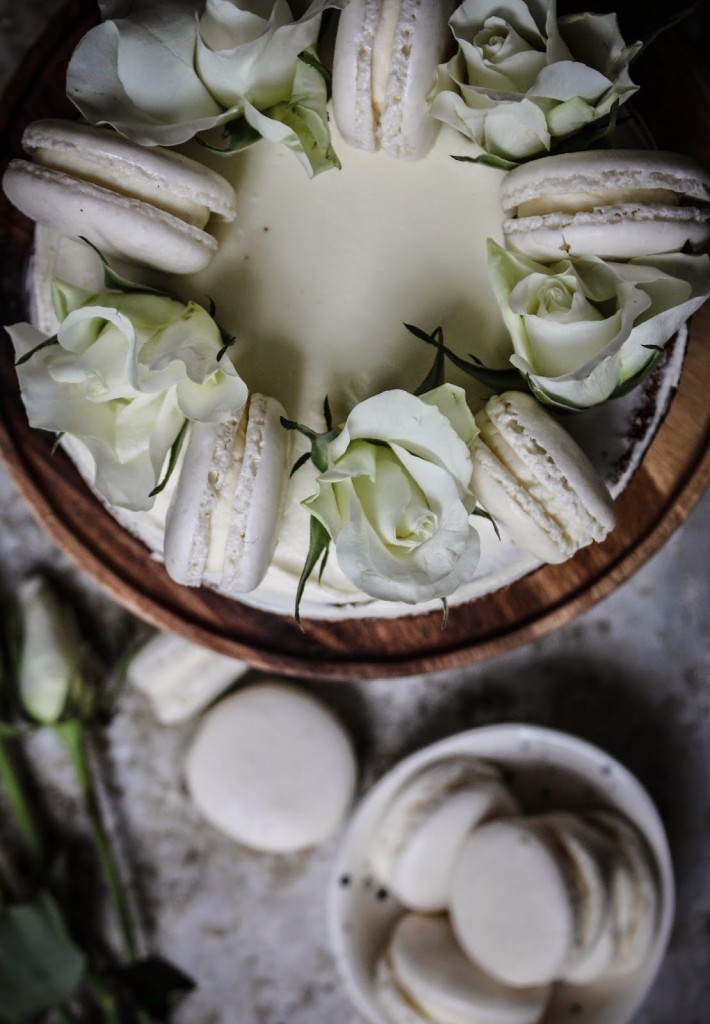 this cake is made with buckwheat flour, and i used half the amount of sugar and replaced it with honey.
the combination of honey and brown sugar makes a wonderful flavour.
i made the frosting with rose extract double cream and mascapone.
i made these Italian macarons to decorate it with, they are so much easier to get right if you are nervous of attempting the french macarons which can be a bit more hit and miss 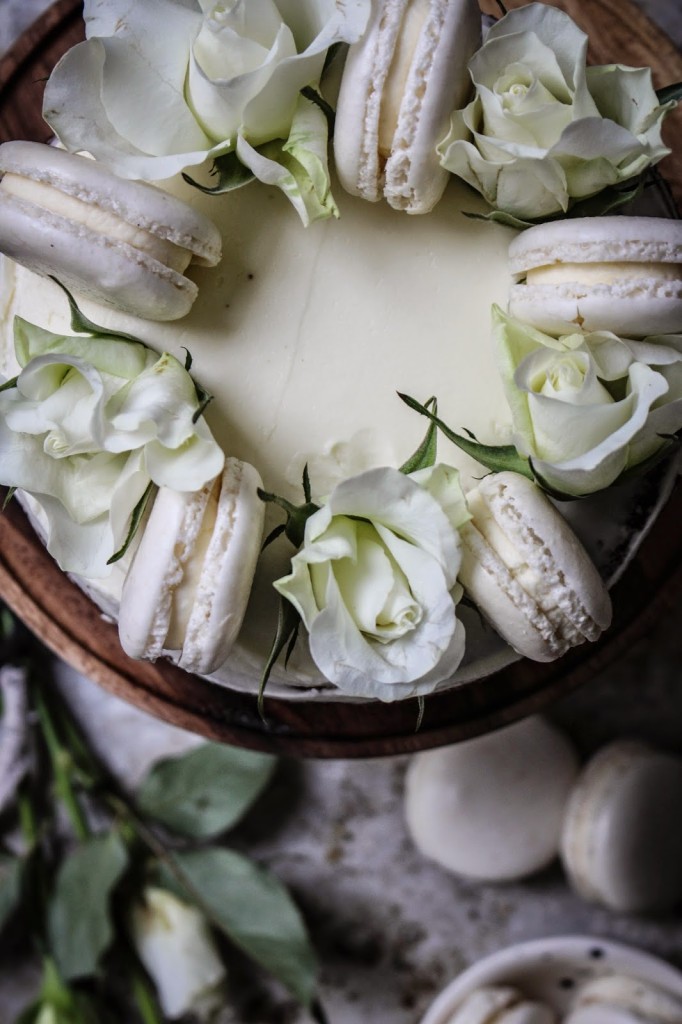 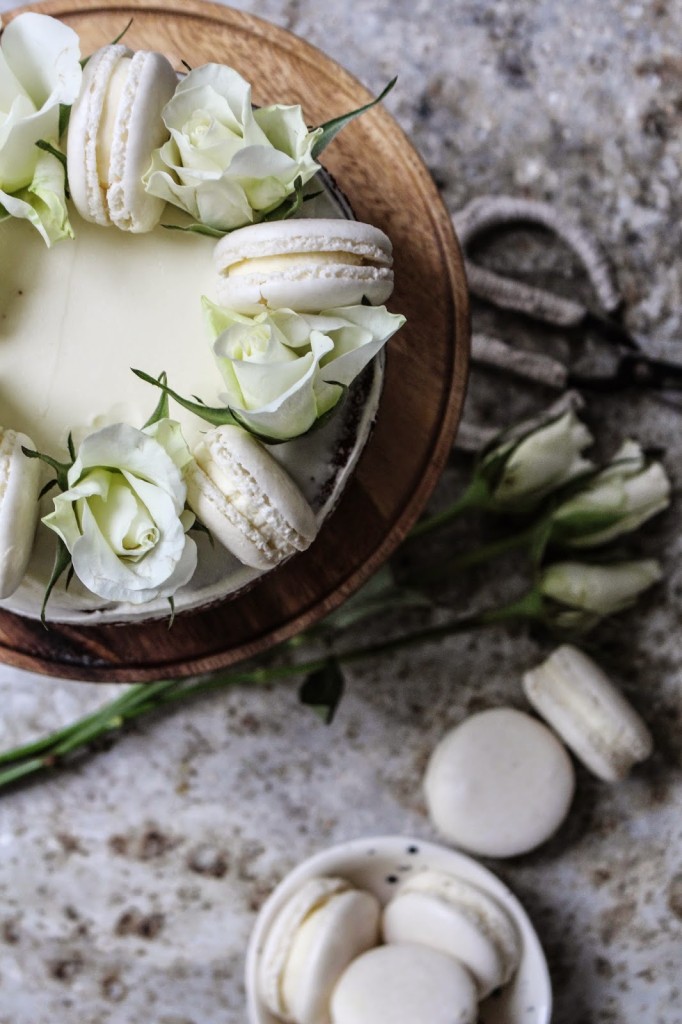 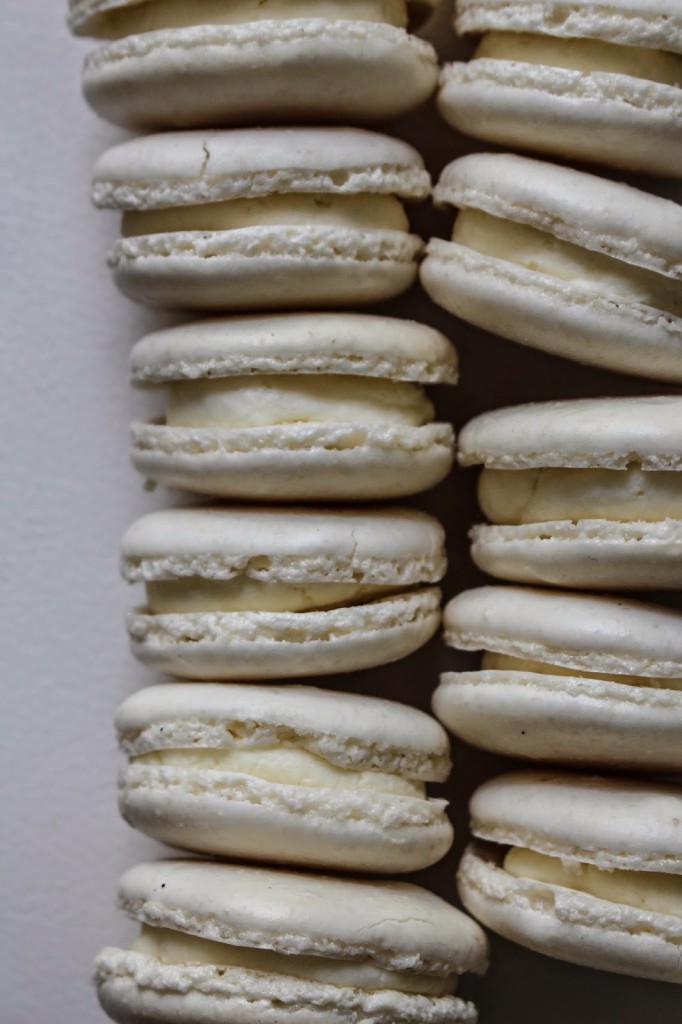 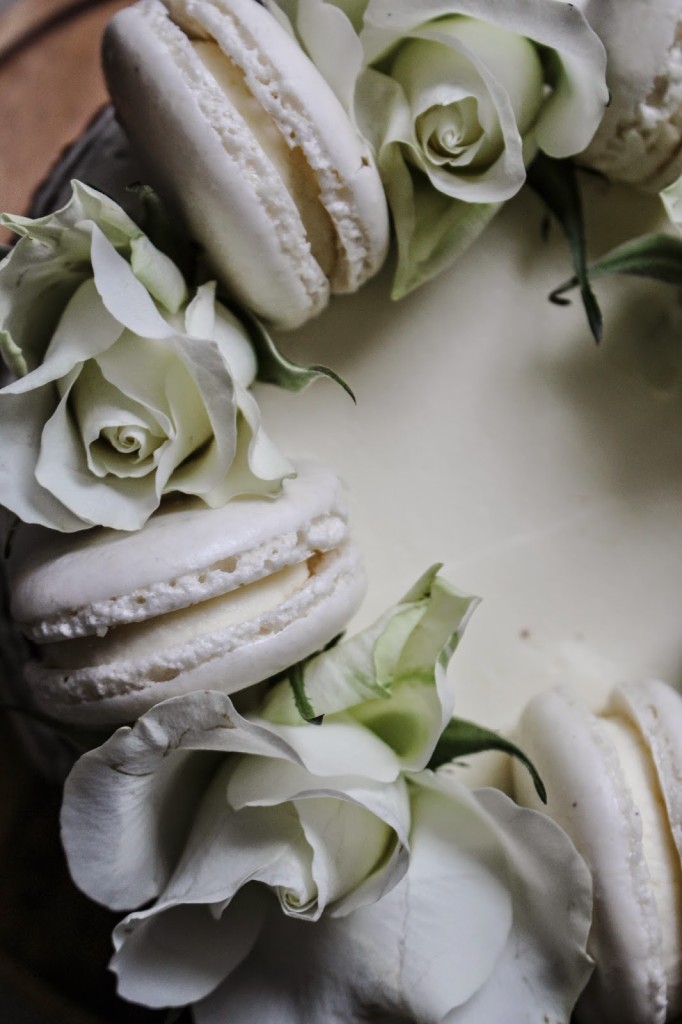 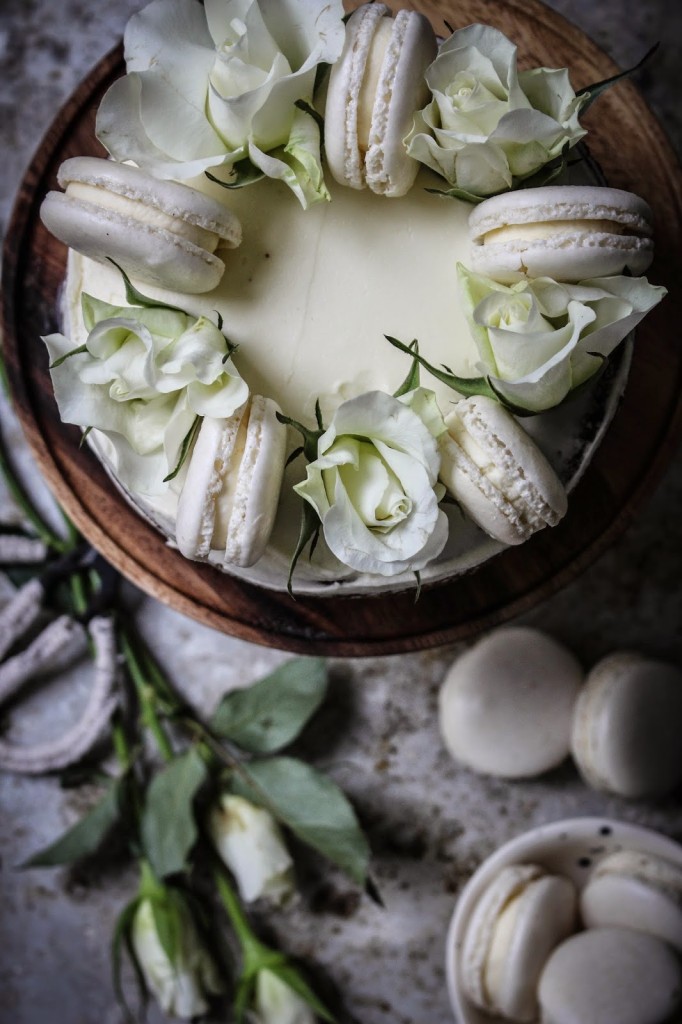 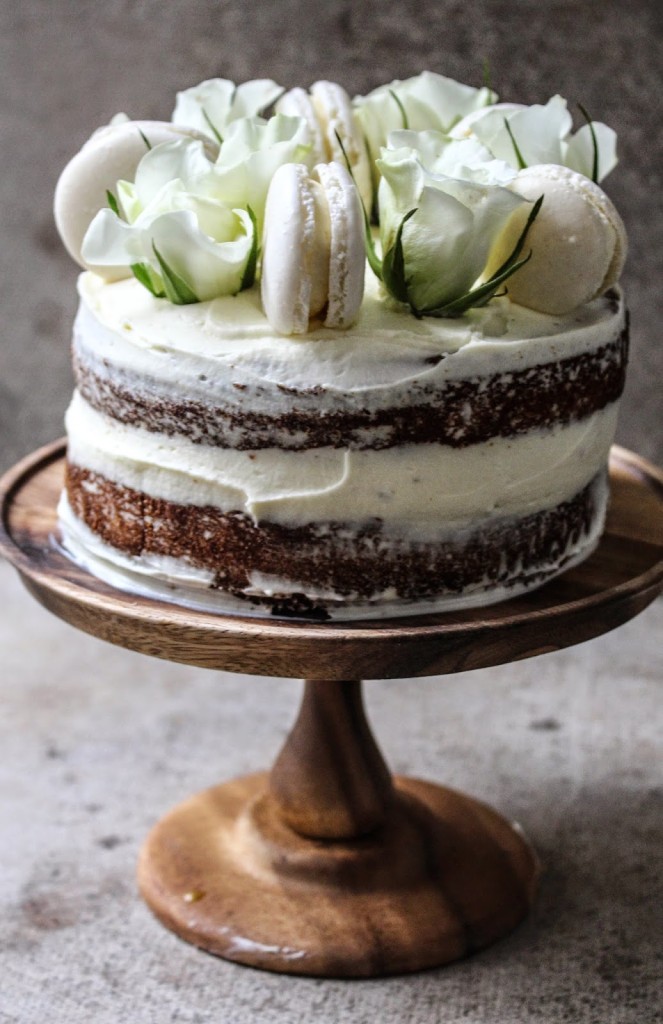 recipe for cake
220g 1 cup unsalted butter at room temperature
150g brown sugar 3/4 cup (if you like your cakes sweeter then use 220g 1 cup)
250ml honey
4 eggs
220g buckwheat flour
2 tsp baking powder
1/2 tsp salt
1 tsp vanilla extract
preheat the oven to 350f 180c
cream together the butter and sugar until fluffy then add the egg one at a time, stopping between each one to scrape down the sides of the bowl.
then add the vanilla extract and honey, and mix.
sift in the flour, baking powder and salt and fold in.
separate between two lined 6 inch tins and bake for about 35/40 minutes
frosting
300ml double cream
220g 1 cup mascapone
few drops rose extract
50g 1/2 cup icing sugar
whip all of the ingredients together in a bowl until thick, fill a piping bag and set aside for the macarons and use the rest to fill the cake, and spread it around the sides, and scrape off the excess.
for macarons
bouchon bakery recipe
212g ground almonds
212g icing sugar
82g plus 90g egg whites separated
236g granulated sugar
158g water
You will need some scales for these as they need to be precise.
weigh out the eggs so that you have 82g in one bowl and 90 in another. add the 90g of egg whites into the bowl of a stand mixer for later.
sift the icing sugar and ground almonds into a large bowl then stir in the 82g of egg whites making a paste.
preheat oven to 180c 350f
in a pan add the water and granulated sugar and heat over a medium heat until a thermometer reaches 120c, when the thermometer gets to about 110c add a pinch of sugar with the egg whites and whip them with a whisk attachment until peaks form, turn the mixer down to low until the sugar syrup is ready, as soon as it reaches 120c turn mixer up to high speed and pour the hot syrup slowly down the side of the bowl.
whip until thick and glossy
fold in 1/3 of the meringue mixture to the almond mixture, then add the rest a bit at a time folding it in,
add to a piping bag with a 1/2 inch round nozzle.
line baking trays with non stick baking paper and pipe the macarons in small circles.
tap the tray onto the work top to remove any air bubbles and to help flatten out and tails left from piping.
turn the oven down to 120c 325f
bake for about 10 minutes,
let cool on tray for 5 minutes before remove them gently and placing them on a wire cooling rack.
pipe the frosting in and sandwich together. 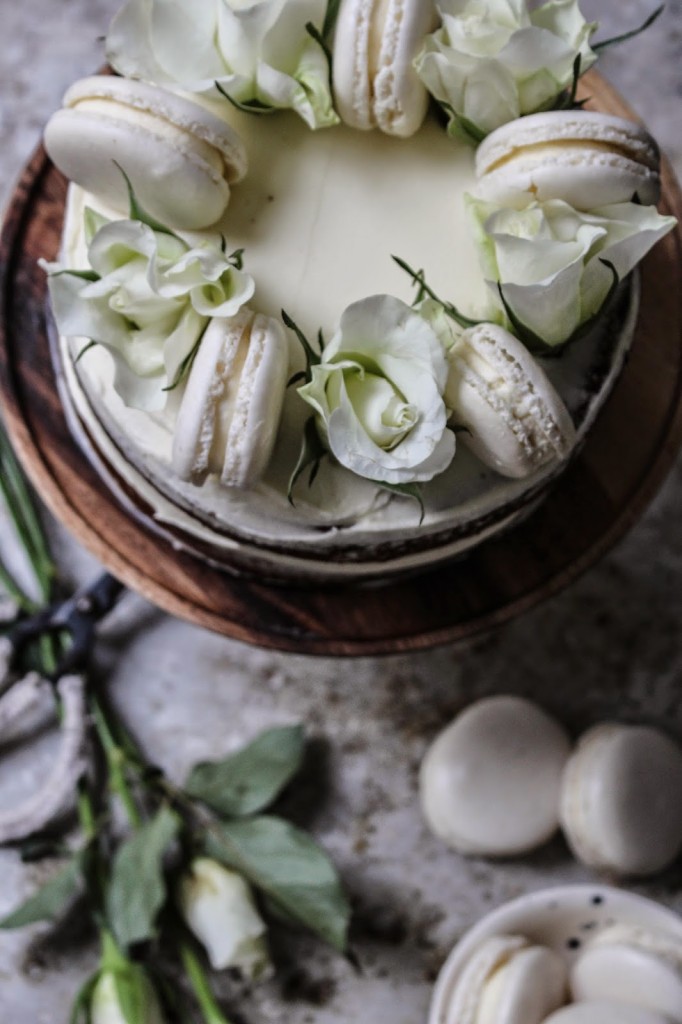 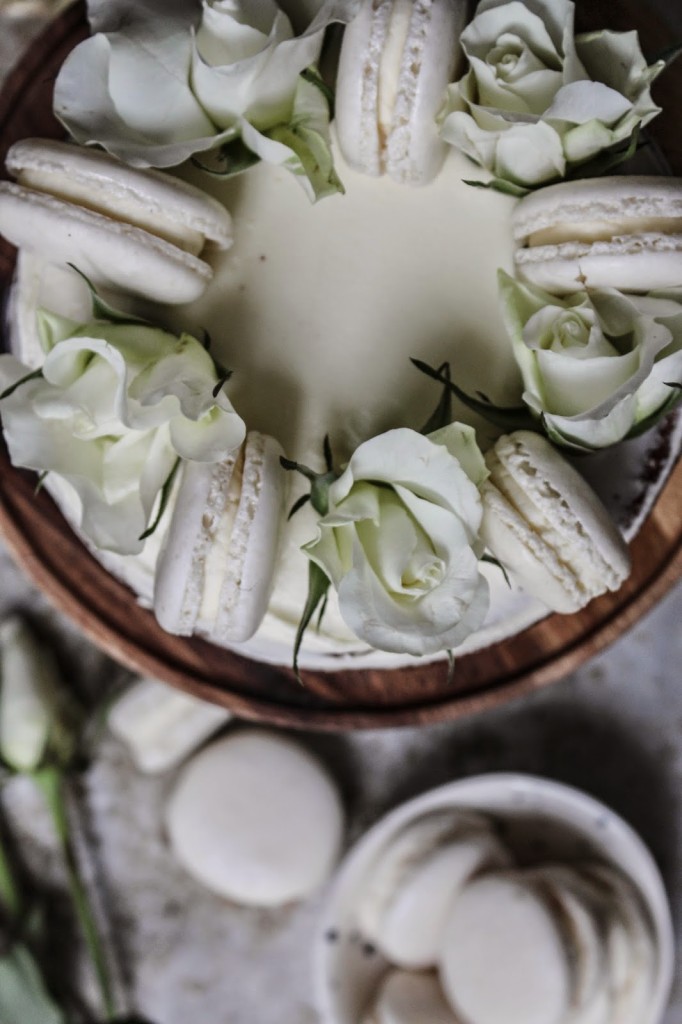